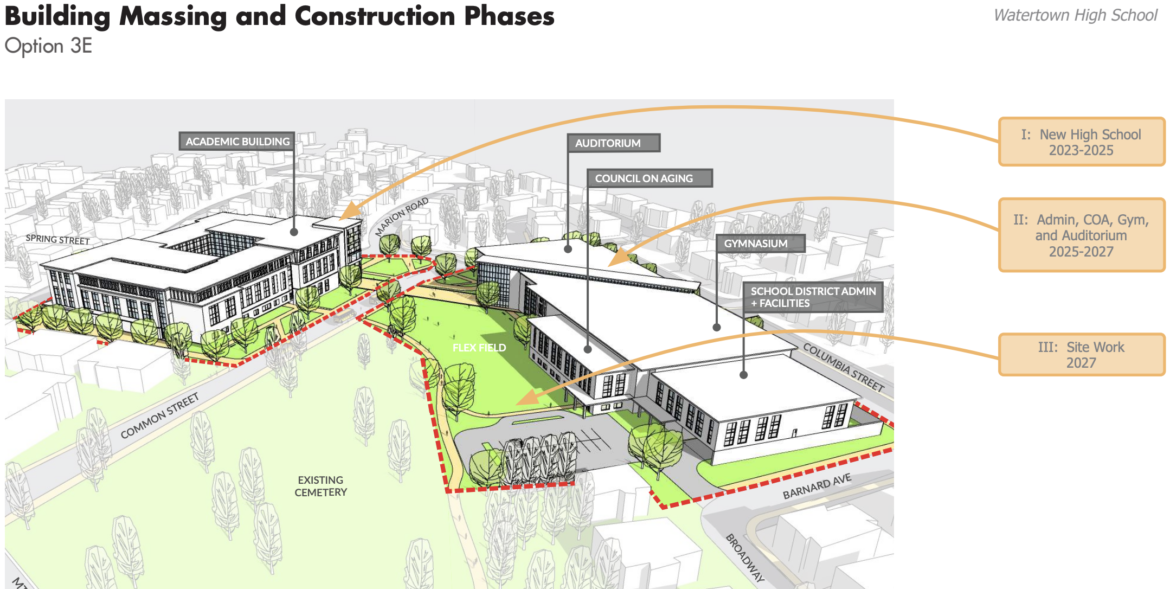 A rendering of a new high school on the current site, and the Phillips School site, with no bridge.

Many participants in a virtual forum on the Watertown High School project favored building a new high school on a combination of the current property and the site across the street where the Phillips School sits. They also spoke out against renovating the current school.

At the forum held on July 29, architects also discussed a third possibility of putting a new school on part of the Victory Field complex, which did not get much support from attendees of the Zoom meeting.

The Watertown Public Schools have been accepted into the Massachusetts School Building Authority (MSBA) program, which means the town will be reimbursed for as much as 48 percent of the project cost. However, some items, such as facilities not associated with the school, as well as work on a site where the school is not going to be located (i.e. demolition of the school if it is built on another property) will not be covered. Dunlap said. There are also caps on certain parts of the project, Dunlap said, such as if the school wants a bigger gym or auditorium than covered by the MSBA regulations.

The School Building Committee has discussed the project for months, and has narrowed it down to five options:

Project designer Scott Dunlap, from Ai3 Architects, said that the length of construction for any of the Option 3 or 4 scenarios would be around the same, about 3.5 years. The schedule for a renovation project in 2B would be about 6 years.

He also reviewed the cost of the various options. For options 2B, 3D and 3E, the cost also includes building a new Senior Center ($11-14 million), new District Administration offices ($8-10 million) and other district facilities ($2.5-3.5 million) which would be displaced when the new school is built on the Phillips site.

The time and cost of 2B made it unpopular with multiple people participating in the meeting, and some asked for the School Building Committee to eliminate that option completely. Dunlap said that an option where the school is renovated must be included as part of the MSBA application process. Also, the Watertown Historic Commission has requested that the schools take a serious look at trying to preserve the original portion of the high school, which dates back to 1925.

Either option 3D or 3E would involve first building a new academic building on the location of the Phillips School. The pedestrian bridge would cost about $1.5 million, Dunlap said, but if there was no bridge there could be other concerns.

“If you don’t have the bridge, with today’s heightened security requirements for schools, we would have to have a secure control zone at each building entry. It would probably have to be manned by staff to make sure that students move between buildings securely,” Dunlap said. “Without the bridge students would be moving outdoors and in again, and maintenance personnel point out there would be a lot more wear and tear on the building.”

“3D is a great use of the space, the timeline makes a lot of sense. It has the least amount of disruption for the students and surrounding community,” Broadstone wrote in a comment read during the meeting.”

Either option would have a parking level underneath the new building on the current WHS site, Dunlap said. Traffic would exit onto Barnard Avenue and Common Street, which concerned one resident who thought drivers would use the Barnard exit to avoid the rotary at Common and Orchard streets.

Options 4D and 4E would require the town to find places to replace field space lost when the new school is built. One field would likely be built on the current high school site.

Dunlap noted that one difference between building a new school on Victory Field, rather than on the current site, would be that the cost of things like demolition and asbestos abatement would not be reimbursed by the state. The estimated cost for asbestos removal is nearly $10 million, he said, and demolition would cost about $3 million. Also, the rebuilding of the athletic fields would not be reimbursable.

When asked if 4D had any advantages over 4E, or vice versa, Dunlap said that 4D has more space for the building, allowing for a better design, but it would also use more of what is now open space to do so.

A number of people opposed using part of Victory Field to build a new school. Recreation Director Peter Centola said the complex is one of the best in the area and has been there for 100 years. Conservation Commission Chair Leo Martin said it is one of the largest pieces of open space in town.

“Victory Field and Whitney Hill combined make up 21 acres of open space in a town with not enough open space,” Martin said. “It would not benefit the town to utilize this space when there are other viable options.”

Another resident worried about traffic problem if the high school was built across the street from Lowell Elementary School. In addition, that site does not have easy access to the either the 71 or 70 MBTA buses.

People also advocated for having the school, wherever it goes, be built with solar panels so it will be generate electricity and be Zero Net Energy like the new Hosmer and Cunniff elementary schools.

Residents were interested in when they could see more detailed designs of the new high school. Town Council President Mark Sideris, who chairs the School Building Committee, said once a preferred option is chosen, then schematic design can begin.

School Building Committee Leo Patterson asked whether the committee was limited to the options presented at the forum. He said he may prefer a combination of some of the options. Dunlap said designers can explore more options if the committee makes a request.

Sideris thanked those who participated in the forum and said the work is far from done.

“This is a very ongoing process, and it is going to get even more complicated as we narrow down (options), because of the many, many issues related to all if these options,” Sideris said. “I urge people to stay tuned and stay involved.”

See more details about the Watertown High School and the elementary school projects at the Building for the Future website (click here).

The next School Building Committee meeting will be Wednesday, Aug. 5 at 6 p.m. Register in advance for the webinar, here:
https://us02web.zoom.us/webinar/register/WN_UVH3JOkCRTe6z5UTp_kVXA

Read more about the WHS project: